Ever since I heard of Keybase, I wanted to join it. Unfortunately, when I first set my sight on it, it required an invitation to sign up. (At the time of writing this, Keybase does not require an invite even though the landing page of the website says otherwise. In case you need an invite, hit me up!)

The concept of Keybase seems to be easy to understand…once you have understood it! When I first heard of it, I was confused. It took me some googling to figure out what it really was. Hope this post clears all the fuzzy theories you have about Keybase. :)

Keybase is a trusted storehouse of public keys. If I want to send you an encrypted message, I can easily find your public key. However, I want to be sure that it is indeed you to whom I am sending the message - this is where the trust factor creeps in.

Keybase establishes trust by connecting to your social accounts. It will require you to post on each of your accounts - claiming them and linking back to your keybase account. So now I get to verify your identity and know that the person claiming to be you on twitter is actually you (as with github, etc). This reinforces my conviction in your public key and makes me feel comfortable in sending you the message.

Note: The following is primarily meant for Linux.

Head to the website and join. After joining, install the keybase app for your desktop. Start keybase by:

This is will open a GUI where you can login. If you prefer to use the CLI:

You can add devices to your keybase account. Each device comes with an encryption key. In case any of your devices is compromised, remove it from your account. Keybase also “tracks” users you follow. So if any user has their device compromised, it will let you know.

The mobile apps are still in development. Until then, you can use something called as “paper keys”. They are NaCl keys which can be used to provision a new computer. It’s a series of words out of which the first two words are the public label and the rest encodes the private key.

It will prompt you to post tweets, gists or what have you to tell everyone: “The person who owns all these accounts is the same - ME! ME! ME!” (obviously not literally).

Keybase creates a nice Merkel tree for you showing how your accounts and devices are connected. Note that you can use the paperkey to provision a second computer which would be shown as an arrow originating from the paperkey itself. 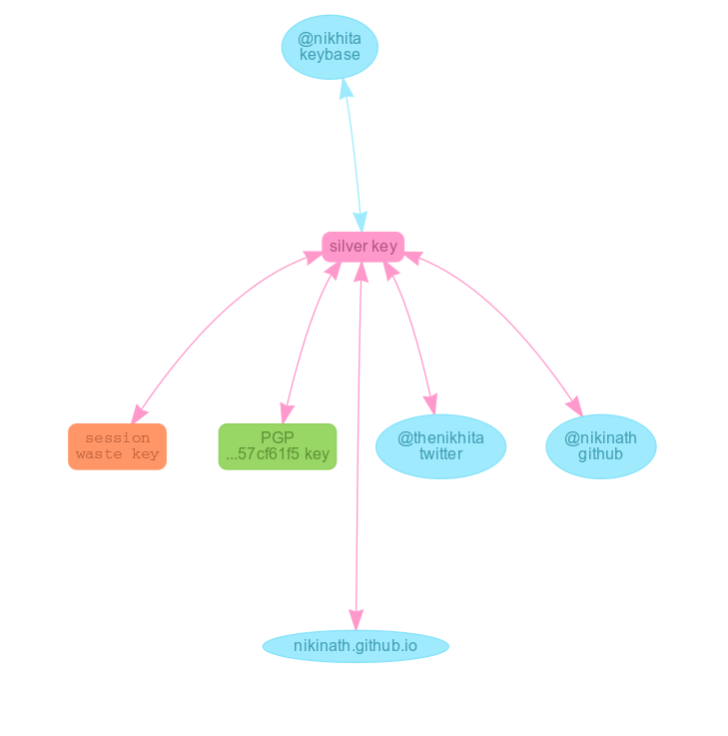 If you have added your private key on their server, you can use the website to encrypt and decrypt messages. In case you decide to do so, remember that encryption/decryption will happen in JS in your browser. So think twice!

If you haven’t added your private key, then you’ll have to use the CLI to encrypt or decrypt messages.

That’s it! Keybase will automatically search for my public key and use it to encrypt the message. Now you can send this encrypted block of text to me via any means - email, twitter, IM…anything! :)

I find this particularly handy because I don’t have to go around asking for the public key. In fact, I don’t even have to know the keybase username. I can send a message using the twitter account too.

More elaborate commands are available in the documentation.

Keybase offers a secure and distributed file storage system (something like Dropbox). Unlike Dropbox, there is no sync model here - files are available on demand. This means that it does not take up any memory on your system. Also, each user in the alpha product is offered 10 GB of space.

The best part of all this? If I am having a conversation with someone on twitter, I can simply say “That file is in our private folder on Keybase” without having to go through the hassle of asking for the public key!

I love Keybase’s goals and design. It is also open source -comforting! There might be security concerns if your account or device is compromised but these can be mitigated by revoking them.

All in all, I like it and it would be exciting to see how it transitions from an alpha product in the future.